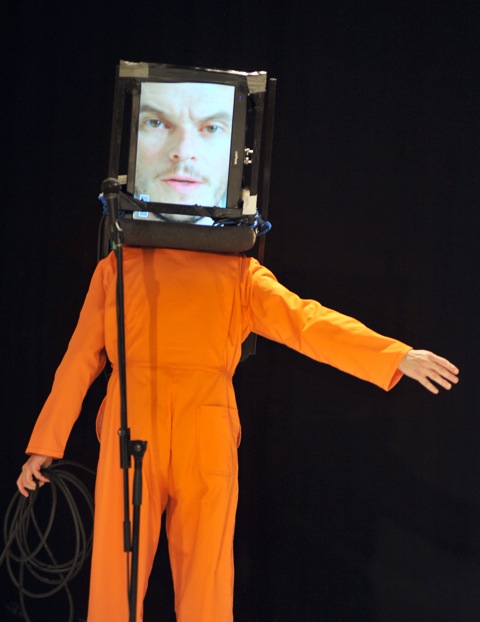 August 2012 – Tanznacht Berlin
According to Plato for any given object there is the name, the definition, the vision and the sensation. But what would it mean if we had no name for it, no definition, no vision, no sensation?

I had planned Der grüne Stuhl as a way to re-open the knowledge we have of things – particularly of a green chair.
And I wanted to do this in the physical and associative ways we developed during the last performance, 'to allege'. The most important and intriguing question was: What is this? Looking for ways to address the known as if it was unknown, we finally chose two ways: a direct live experience and a mediated one. By using a very common daily life object I dreamed that the enormousness of its references would allow it to drift away and start signifying something else on top of its references. But it never happens, the thing remains itself, desperately common.

Or as well beautifully common. This appears to me, after these two years of research, as a pure object of representation, representing without any object to represent. Emptiness.
Nothing there to mean, even no abstraction that would say "it is what it is", desperately empty thing. But free of responsibility, like the liberal market, nothing to stand for, than itself.

"The words implies the absence of things, as well the desire implies the absence of its object... one and the other end up in a dead end: the one of communication and the one of happiness." – Tzvetan Todorov, Poétique de la prose
Concept, direction: Clément Layes:
Dramaturgic assistance: Jasna L. Vinovrski
Choreography, interpretation: Felix M. Ott, Felix Marchand, Clément Layes

Produced by Public in Private. Thanks to Tanznacht Berlin 2012.