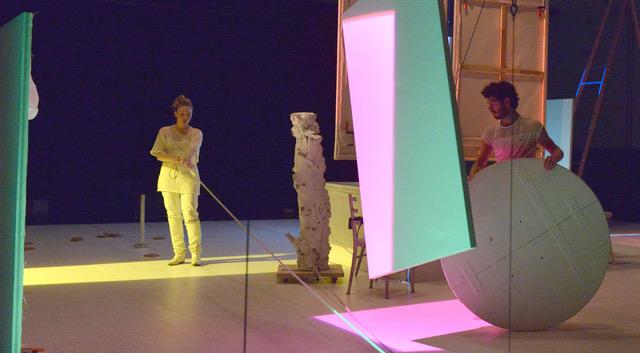 12-15 dec 2019 - Sophiensæle Berlin
ONON looks at the walls we live in and the rules we live by
ONON builds an allegory of our time
ONON is half human, half mechanical
ONON explores the line between the stability of structures and the fragility of movement.
ONON cuts movement into fragments
ONON seeks to better understand the (inter)dependence between the human body and anonymous systems.
ONON is a machine
ONON is a mobile labyrinth.
In ONON human and non-human agents create a multi-rhythmic performance reminiscent of Fernand Légers Ballet Méchanique.
In ONON things move.


In recent years, Clément Layes has been working with rhythm as a fundamental element for the operation of theater and dance. In the group performance The Eternal Return (2017), rhythm was used to explore the liminal spaces that are produced by our daily actions. In The Emergency Artist (2018), rhythm served as a break, as an element that abbreviates, interrupts and displaces the temporal structures of our existence, and in doing so, suspends these actions. ONON is the third and last performance in this series.
choreography Clément Layes
performance Cécile Bally, Mariana Vieira, Asaf Aharonson, Nir Vidan,
stage Jonas Maria Droste, Clément Layes
light Ruth Waldeyer
sound Steve Heather
costume Malena Modéer
video Christopher Hewitt
dramaturgy Jonas Rutgeerts
international communication Inge Koks
press and production björn & björn