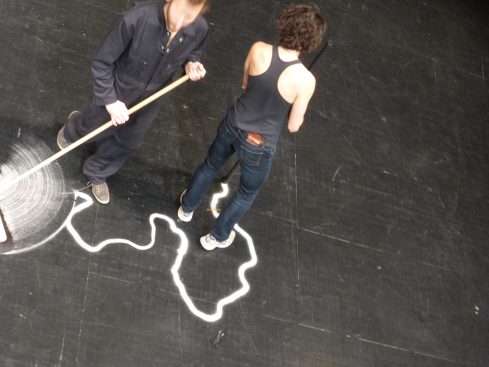 April 2012 - Sophiensale Berlin
The background of our daily lives is the night and the dreams inhabiting it. Beautiful figures appearing in the deep sleep, or recurrence of unwanted images, dreams, as we wake up, let us wondering for their meaning or their reasons to be.
By designing a ‘stage’ for dreaming “dreamed apparatus” looks into this nocturnal occurrence, and our wandering into this memories. Using simple gestures, the performers draft, evoke and play with the dream and their eventual keys. Their actions create a texture in which language, movement and images are no longer trapped in a logic based on meaning, but are able to interchange, collide and entangle. Together with the operators they construct an apparatus wherein the unknown, the free-floating and the non-rational becomes the protagonist.
Choreography/concept: Clément Layes
with Vincent Weber, Felix Marchand, Justin Palermo & one guest
Dramaturgy: Jonas Rutgeerts
Concept & choreographic collaboration: Jasna Layes-Vinvorski
Collaboration dramaturgy: Henri Layes
Light: Ruth Waldeyer
Sound: Uli Ertl
Costumes: Jelka Plate & Eike Böttcher
Distribution: BOLD
Production management: björn & björn